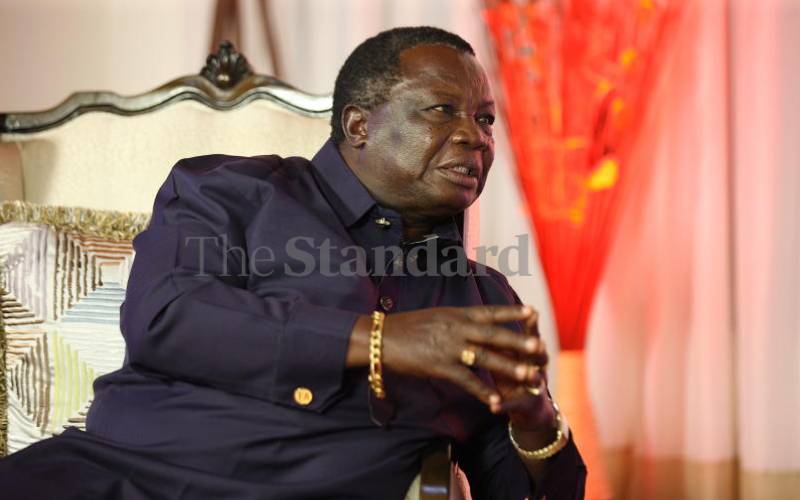 Cotu Secretary General Francis Atwoli (pictured) has asked Wiper Leader Kalonzo Musyoka to desist from giving many demands and instead focus on campaigning for a Raila Odinga presidency.

Atwoli urged Kalonzo to find ways of talking to the Azimio La Umoja One Kenya Coalition’s key partners, Raila or President Uhuru Kenyatta, directly if he has a burning issue rather than doing it through the media or his allies.

Speaking in Khwisero sub-county yesterday during the burial of Herman Okeno, the unionist said too many demands in public would create unwanted tension in the coalition.

“I know Kalonzo as an important figure in the coalition and he should focus on building confidence and make people vote for the coalition. Too many conditions will make someone who was to give him deputy president position think twice,” he said.

This came a day after Kalonzo’s allies led by Kitui Senator Enoch Wambua and former Transport CAS Wavinya Ndeti demanded that Raila unconditionally picks their man as his running mate.

However, Atwoli maintained that Kalonzo should look at the bigger picture of winning the top seat and stick to the promise he made when he joined forces with Raila that he would support him unconditionally.

“The low turnout you saw was a clear indication that the Central people are angry and want nothing to do with the UDA and its leader because of how Ruto has incited his allies and residents against their son and leader, President Uhuru,” said Atwoli.

He said Western Kenya will vote to the last man for Raila, stating that all strong MP aspirants were united with their people under Azimio.

“Musalia Mudavadi and Moses Wetangula went to work with Ruto as individuals, the reason why all Mudavadi MPs in Kakamega decamped to ODM. Vote out Kenya Kwanza affiliated leaders,” he said.

Khwisero MP Aseka Miradi, who recently joined ODM, said they will campaign for Raila and deliver Western votes to Azimio and thanked Central and Rift Valley voters for rejecting leaders who used to insult the ODM leader.