Kenyans on social media have been saddened by the sorry state of late Nyeri governor Wahome Gakuru’s grave and his unfinished deserted home.

Gakuru died in a grisly road accident at Kabati along the Thika-Sagana highway on the morning of Tuesday, November 2017, while travelling to Nairobi for an interview with a local radio station.

Recently, pictures of his gravesite showing a pitiful state emerged on social media leaving many Kenyans saddened by its sorry-looking state.

A little over four years after his death, pictures of his final resting place painted a picture of abandonment, as it had not been tended for a long time going by the weeds growing around it.

It remains abandoned in an open field only fenced with a mesh wire and a wooden cross bearing the names and brief details about the late county boss.

His incomplete house which is also deserted also broke the hearts of many Kenyans.

Here are some of the comments sampled by TUKO.co.ke:

“Last night I couldn’t believe my eyes. Wahome Gakuru (continue RIP) soul deserves better. He was one of the best brains I have ever met, he was ambitious and not greedy.

I can go on and on but I repeat his soul deserves better and if the county has failed, bring the paybill we will contribute,” a Kenyan identified as Njihia Kelvin said.

“I am a sad person. What was promised by the Nyeri county government including the completion of the Gakuru house and construction of the grave five year’s down the line never happened yet Governor Kahiga lied on national TV,” he said. 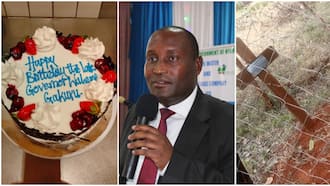 “This is very sad, so sad. Four years no memorial, not a single help to the family the house is in disgrace, you mean there is nothing you could have done to avoid this shame,” he said.

“The family of late governor Wahome Gakuru was promised by the Nyeri county government the construction of the grave and completion of the house but five years down the drain nothing has happened.”

So far, some locals from Nyeri have pledged to work on the grave should it remain in the state.

TUKO.co.ke recently reported that Gakuru’s family held a low-key birthday ceremony to remember him nearly five years after his demise.

On Monday, April 4, 2022, his family gathered at his rural home and celebrated his life in an unusually modest event that was kept off by his former allies and close friends. 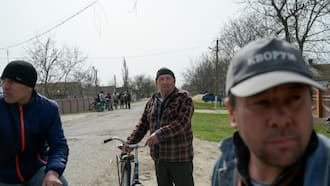 A medium-sized cake was placed in the living room of the late politician’s house where prayers were held and brief speeches by family members given in his remembrance.

Close family members intimated to TUKO.co.ke that no single promise has ever been fulfilled since Gakuru was buried.