Home » Teen’s idea a blessing for Turkana farmers
Previous Next

Picture this. Turkana County, one of the arid and semi-arid counties, has the highest number of irrigation schemes in Kenya at 51, acres of rich virgin soils and loads of sunshine –  just the perfect ingredients for a lush farm.

But thanks to decades of neglect, it is still desperately food deficient. But there is a ray of hope. Determined to change the sorry state of affairs in Turkana, the second-largest county, a new ambitious plan has been mooted.

Dubbed the Turkana County groundnut production initiative, the five-year project funded to the tune of Sh313 million, seeks to put 18,000 acres under groundnut production and impact the lives of 15,000 farmers directly. It hopes to bring a Sh2.3 billion annual income for four years.

“Indeed, this is a turning point for Turkana County. This project will change Turkana’s wilderness story. A wilderness of famine, of few educated people, of diseases, of conflict, of poverty and into a future of plenty and promise,” Turkana Governor Josphat Nanok said during the launch of the project in Lodwar last week.

In the pilot project, Egerton University experts are already working with 500 farmers from Nanyee and Kalemnyang, along various irrigation schemes along Turkwel River.

The farmers, who get water from River Turkwel through canals that use furrow irrigation, are growing the groundnuts on manageable plots subdivided into quarter acres.

The project is spearheaded by a team led by the Turkana County government, Food and Agriculture Organisation (FAO), World Food Programme, United Nations High Commissioner for Refugees, Insta Products, and IKEA Foundation. Egerton University is offering research-based knowledge for maximum crop production and guidance to farmers who are still new to crop farming.

The project has so far received a total of Sh313 million — USD 1.5 million from IKEA Foundation and the European Union gave USD 1.3 million.

FAO Kenya Representative Carla Mucavi, speaking at the launch in Lodwar, said the project strives to improve food and nutrition security while increasing incomes answers directly to our goal.

“We are happy to join Turkana County and other stakeholders to launch this great roadmap that will see Turkana become a leading producer of groundnuts,” said Ms Mucavi.

Speaking of incomes, the project hopes to generate Sh144,000 per annum for every farmer, which translates to Sh12,000 per month.

Though it may sound little at the beginning, for a pastoral farmer who is learning the ropes of diversification, this is something worth the effort.

Interestingly, this bold idea is the brainchild of Tisca Chandaria, a 19-year-old Kenyan (now in the US studying), who saw an opportunity and ran with it.

“When this young lady approached my office to share the idea, I was impressed. She told me about how her grand idea to grow groundnuts in Turkana that will be later exported to Argentina under Insta Products,” Nanok narrated how the idea was born.

Tisca is based in the US but in a WhatsApp interview with The Smart Harvest shared what inspired the idea.

“In November 2018, my professor asked us: “How do you solve the refugee crisis?” Having grown up in Kenya, I immediately thought of two refugee camps familiar to me: Dadaab and Kakuma. I called up my father after class, and asked him about this idea of having the guest and the host communities farm the groundnuts we use for Insta Products instead of importing from abroad,” Tisca shared. 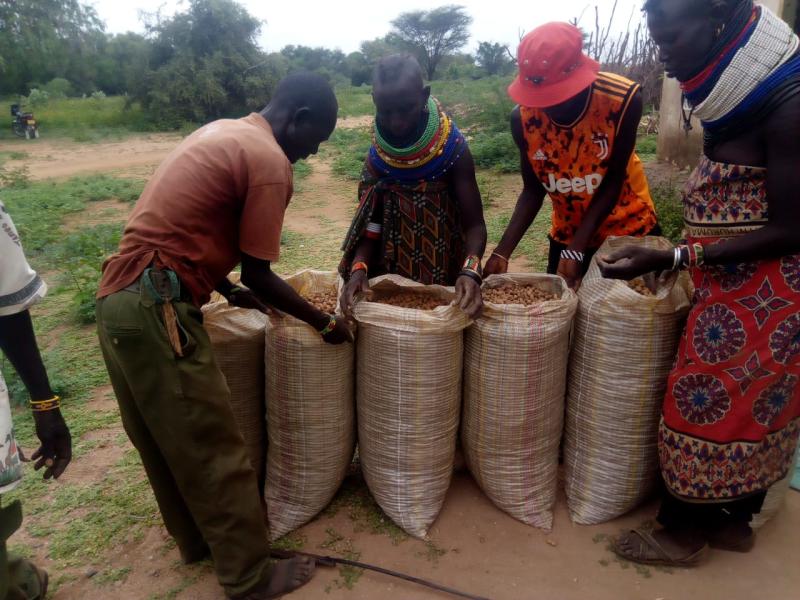 When all was set, she moved with speed to actualise her idea.

“I flew out to Kakuma a week later and met with the UNHCR and FAO to explore the possibility of growing groundnuts. The deeper we dug into this idea, the more it started to make sense,” Tisca recalled.

“Our tests determined that the soil in Turkana was perfect for this purpose.”

Like many with grand ideas, she faced opposition and resistance, but soldiered on.

“Many people said it was not possible to grow in Turkana to which I would ask, “Why? Is it impossible, or is it simply not easy?” You must shake assumptions and understand a problem at its core. People said Turkana is too dry, there is no water. This assumption is incorrect! There is water but you must understand how to manage it.”

Despite the distractions, she remained focused as she pushed on the idea.

“I’ve learned a lot of lessons from this experience. When this project started, I had no experience in agriculture. But, what I did have was a strong passion and people who listened with an open mind. I believe my inexperience allowed me to look at the problems without bias.”

Slowly and steadily, she gained the confidence in critical players from the county to the UN and the project took off.

“From FAO to IKEA Foundation, WFP, UNHCR, and most importantly the Turkana County — each partner bought into the shared vision and could see the potential,” Tisca said.

Groundnuts she noted, are a high source of protein and nutritious. By introducing this drought-resistant crop into their diet, it would help address the issue of malnutrition.

She reckoned that the farmers would also sell the excess nuts to Insta Products and have a consistent source of income on top of what they get from their livestock.

Data from the United Nations shows that malnutrition remains a major problem in Turkana where 25 percent of children under the age of five are stunted, 25.6 percent wasted, and 37 percent are underweight. These high rates are attributed to chronic household food insecurity and poor dietary diversity. 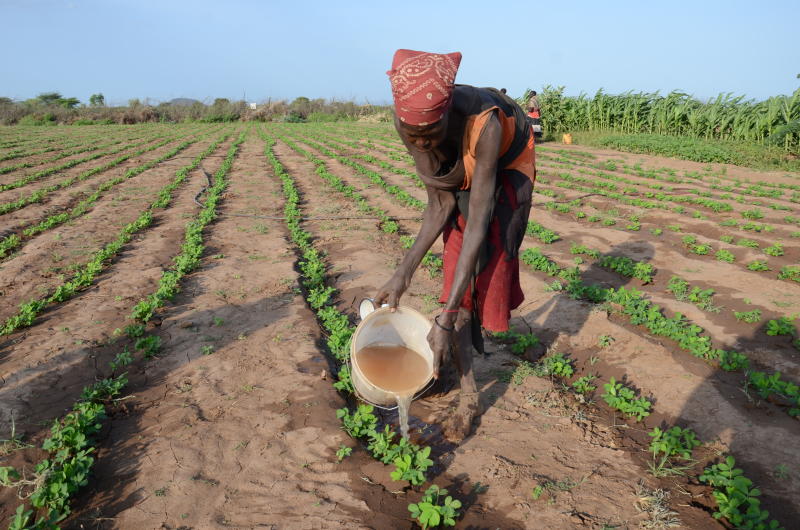 Through a pilot project, groundnuts have been shown to have the potential to improve food and nutrition security. The ability to tolerate drought makes them the best for Turkana. The existence of extensive irrigation schemes makes it ideal for groundnut production.

Tisca is amazed how the project has grown from a classroom idea into a million-shilling project. Nikita Chandaria the Vice President of Insta Products, a food manufacturer based in Athi River, said they will buy all the groundnuts which will then be processed into a highly nutritious paste that is later exported. Insta Products, she said, specializes in manufacture of foods that treat severe and moderate acute malnutrition in children under the age of five

“Our products are exported all over the world wherever there is a crisis, drought, and famine,” said Nikita.

Nikita said they are particularly keen on groundnuts from Turkana because they have been proven to be aflatoxin-free, unlike most nuts from some common growing regions that are contaminated.

Research has shown that given Turkana’s ecological conditions, it can produce groundnuts with zero-aflatoxin.

Prof Paul Kimurto of the Department of Crops, Horticulture and Soils and Director, Agro-Science Park, confirmed that research was done that showed that Turkana has ideal conditions that favour the growth of groundnuts with zero aflatoxins.

“As researchers, we have established that groundnuts grown in Turkana have zero aflatoxins and can grow with zero fertiliser and pesticides. With the high demand for groundnuts, such are premium in the international market,” Prof Kimurto said.

To ensure the farmers do not use pesticides that have been blamed for causing an upsurge in cancer cases, Prof Kimurto said they are teaching them Integrated Pest Management methods.

“We are teaching them simple strategies like crop rotation to break cycles of pest infestation. So they can alternate growing groundnuts and sorghum. We are also teaching them how to use natural ways to control pests,” explained Kimurto. 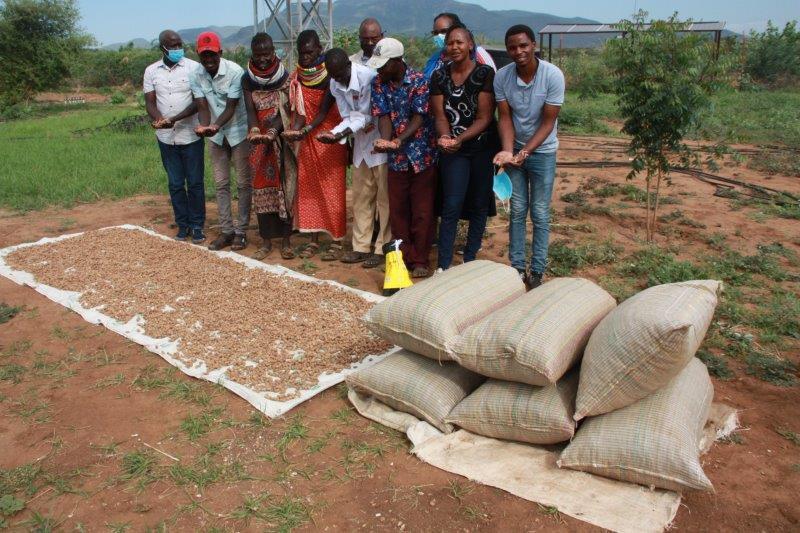 Integrated pest management (IPM) combines the use of biological, cultural, and chemical practices to control insect pests in agricultural production. It seeks to use natural predators or parasites to control pests, using selective pesticides for backup only when pests are unable to be controlled by natural means.

Admitting that quality seed shortage for groundnuts is a challenge, Prof Kimurto said they are also teaching the farmers on seeds production and to ensure a robust seeds system, they are working with farmers from Baringo and Elgeyo Marakwet counties to ensure that the farmers in Turkana have a constant flow of quality seeds.

The momentum for production is picking up and by the end of 2022, over 3,500 acres are expected to be under the crop, says FAO Mike Ngutu.

The farmers are growing Mwangaza variety of groundnuts that are red, sweet, and highly nutritious, which have high oil and protein content.

And as the project develops a life of its own, Tisca’s passion is best depicted by a French poet and novelist words nothing is more powerful than an idea whose time has come.

“Your ideas may sound crazy but hopefully you find people along the way willing to listen, to test your ideas, and to support your unconventional thinking. You never know what you might end up building.”