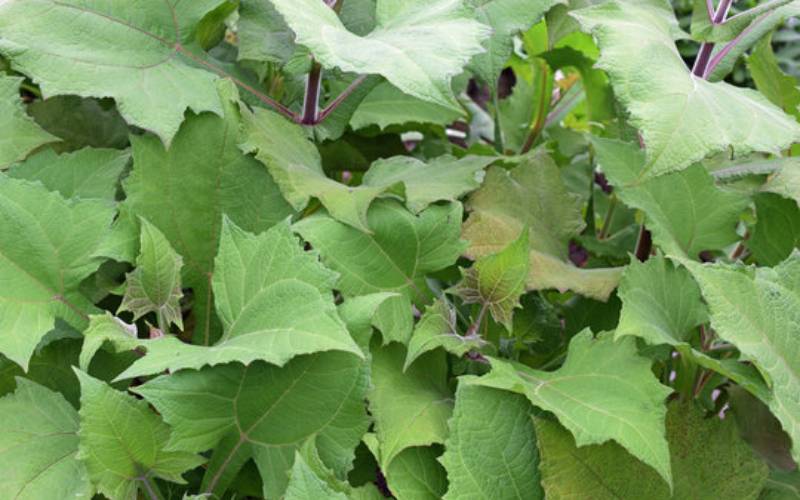 A farm in Maston village along the slopes of Mt Kenya has become an attraction after the introduction of the Peruvian Ground Apple popularly known as Yacon.

The plant that is usually grown in South America is doing well in Kabaru Ward in Kieni East, Nyeri County at an altitude of 22,255 metres.

Yacon leaves are also used as vegetables as they are delicious and medicinal.

People visit the farm to learn more about the economic and nutritional value of the newly introduced crop.

Apart from the tubers that resemble apples, the leaves are used as vegetables and require a lot of care to protect them from diseases and pests.

According to John Maina, the Kieni East Agriculture Crop Development Officer, the Ground Apple has a lot of benefits that attract better prices internationally.

The agriculture officer said a tuber can grow upto a four kilogrammes in seven months, with an acre of land estimated to yield 24 tonnes of the crop.

In the local market a kilogramme of the tuber fetches above Sh500, depending on the market.

In South America, the Yacon and can be eaten raw, or used in making juice for market or domestic purpose.

“The plant contains carbohydrates, fructans, sugar, protein, fiber and fat,” said the agriculture officer, adding that many people have been researching it.

Matu said he was encouraged to plant the tuber in an effort to support people suffering from lifestyle diseases that require treatment through nutritious foods.

“Land preparation is tricky as ploughing is banned as it could injure the tubers,” he said, adding that mulching is encouraged for water conservation and to suppress weeds growing between the plants.

Matu advised that eating the fruit raw is the best way to consume it after first peeling just like potatoes.

The crop can also be used as foliage for livestock.

It is also useful for agronomy due to his canopy that prevents evaporation of water from the soil.