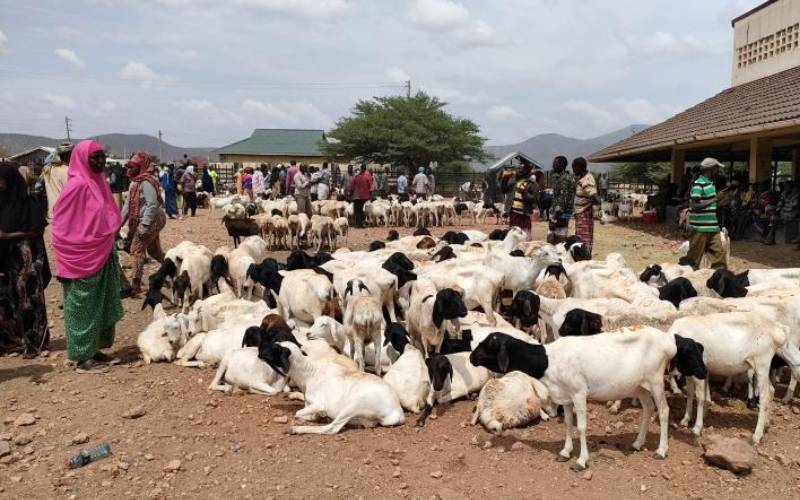 It’s a Friday morning and the Isiolo Livestock market is a hive of activity as traders and buyers hustle and argue over prices of particular livestock.

Despite being the main market, fed by 15 smaller markets across the county, one would expect tens of thousands of livestock-cattle, goats and sheep. But, its not, due to traditions and culture that bars pastoralists from selling their livestock.

Records show in a week, the market receives around 300 cattle and 5000 goats and sheep.

In fact, Abdinasir Muhammed, Isiolo Livestock Market Caretaker reveals this number is high as pastoralists rush to sell their livestock in fear of losing them to severe drought.

“Here, it is prestigious if you have more cattle than your neighbour. So you keep as many as possible. Selling is out of the question, whether there is a lucrative market. Right now, we have more animals.

On a normal day without drought, the market receives around 150 cattle and 3000 goats and sheep,” he said.

Abdinasir adds, in some areas animals are dying but owners resist selling with the hope rain will come and there will be pasture.

Robert Arionotuk is yet to recover from the shock of losing livestock. He says out of the 20 cows he had before the drought, he’s left with only two cows and a good number of goats and sheep.

If he had heeded the warning of an impending severe drought, Arionotuk would not have incurred such a huge loss were it not for the culture.

“I wanted to sell most of my cattle when I learnt of the coming drought. But my family wouldn’t allow me because in my culture, selling a cow takes the approval of the entire family and some time the whole community,” said Arionotuk at Attan village in Ngare Mara, Isiolo County.

He says when he wanted to pay fees and build a house, his family summoned him to explain the reason for selling his livestock.

“I told them my children wanted school fees and I also wanted to build a new house. They approved my request and allowed me to sell only one cow. The money was never enough, so l was forced to look for work elsewhere to get money for the fees and a house,” he says.

He lost 18 cows, each valued at Sh45,000. While this is a lot of money, his family tells him money isn’t bigger than culture. And there are those who have lost hundreds of livestock and have not complained.

Now, a new dawn has come for Arionotuk and others who have over the years found themselves struggling to set themselves free from the shackles of culture that stops them from selling their livestock.

The launch of Kenya Livestock Market Systems, a social and behaviour change campaign that is set to enlighten pastoralist communities on how to stop keeping their livestock for prestige but for commercial purposes as well.

In the past, pastoral communities have not benefited from their livestock, yet pastoralism is a major contributor to the economies of countries in the Horn of Africa. Kenya’s pastoral sector is worth over US$800 million, and provides more than 80 per cent of the meat consumed in the country.

The programme is set to promote the change in the attitude and mindsets of the pastoralists toward the commercialisation of traditional livestock systems, animal health, quality standards, improved animal breeding uptake messaging and its advantages such as productivity and adaptability, end buyer transactions and pastoralist capacities, including the role of women.

Dr Ahmed Galgalo, County Secretary Isiolo said that historically, culture has been a real major issue in terms of commercialising livestock business, a factor that has contributed to high poverty level in the county.

“Most people keep large livestock and overstock the area, and when drought comes it wipes out livestock, so the rich man yesterday is a poor man today. That is the cycle,” he says.

This culture, he says, promotes cattle rustling. As people compete to have more livestock, they go stealing from neighbours, reason why rustling is still rampant.

He explains that they are embarking on a journey to change the mindset of pastoral communities to start keeping livestock for market and commercial purposes. He however reckons, it requires aggressive campaign for it to work.

Dr Galgalo said County has completed building an abattoir and he’s optimistic that it will provide a huge market for livestock farmers.

At the Isiolo market, James Lohote had come to sell five cows, fearing he might lose all to drought. “I had 55 cows before the dry spell. I have lost 13 and majority are emaciated,” he says.

Under normal circumstances, Lohote says he cannot sell his livestock because his five sons will soon need bride price.

“As per our traditions, as a father l must pay bride price for all my sons. So, if l am paying 15 cows for everyone, then you know why l cannot my cattle, unless being forced by circumstances like the current severe drought.”

But, Lohote cites low prices saying some people want to purchase a cow worth over Sh40,000 for as little as Sh20,000.

According to National Livestock Information System, livestock market in Kenya is dominated by middlemen or brokers who manipulate producers through price distortion. This has resulted in low earnings for the pastoralists.

Ambrose Ng’etich, Livelihood Recovery Expert for Food and Agriculture Organisation, Isiolo, says the most critical thing for pastoralists now is good animal husbandry skills which will help them start offloading their livestock before the drought hits and only keep a sustainable herd which they have the capacity to sustain during the period of drought.

“Drought deteriorates pastures and the number of animals within the area cannot be sustained, leading to overgrazing and eventually degradation of the natural environment,” he says.

With the social change campaign, Ng’etich says they want to support communities through making available necessary skills and knowledge that can support the enhancement of livestock health, their capacity and ability to know when to reduce the livestock.

Isiolo Governor Dr Mohamed Kuti says he considers critical the management of livestock markets given that it involves animal welfare too.

“The overall aim of Kenya Livestock Market System Activity is to enable people, households, and communities to escape poverty and chronic vulnerability and strengthen their resilience,” said the governor.

He said the LMS programme is in line with the implementation framework for critical priority projects by the National Government under the Big Four Agenda.

Dr Kuti challenged farmers to move away from rain-fed agriculture to produce cost-effectively.

“We need to ensure that we assist farmers in the adoption of the modern crop, livestock and fish farming practices that are resilient to  changing weather patterns.